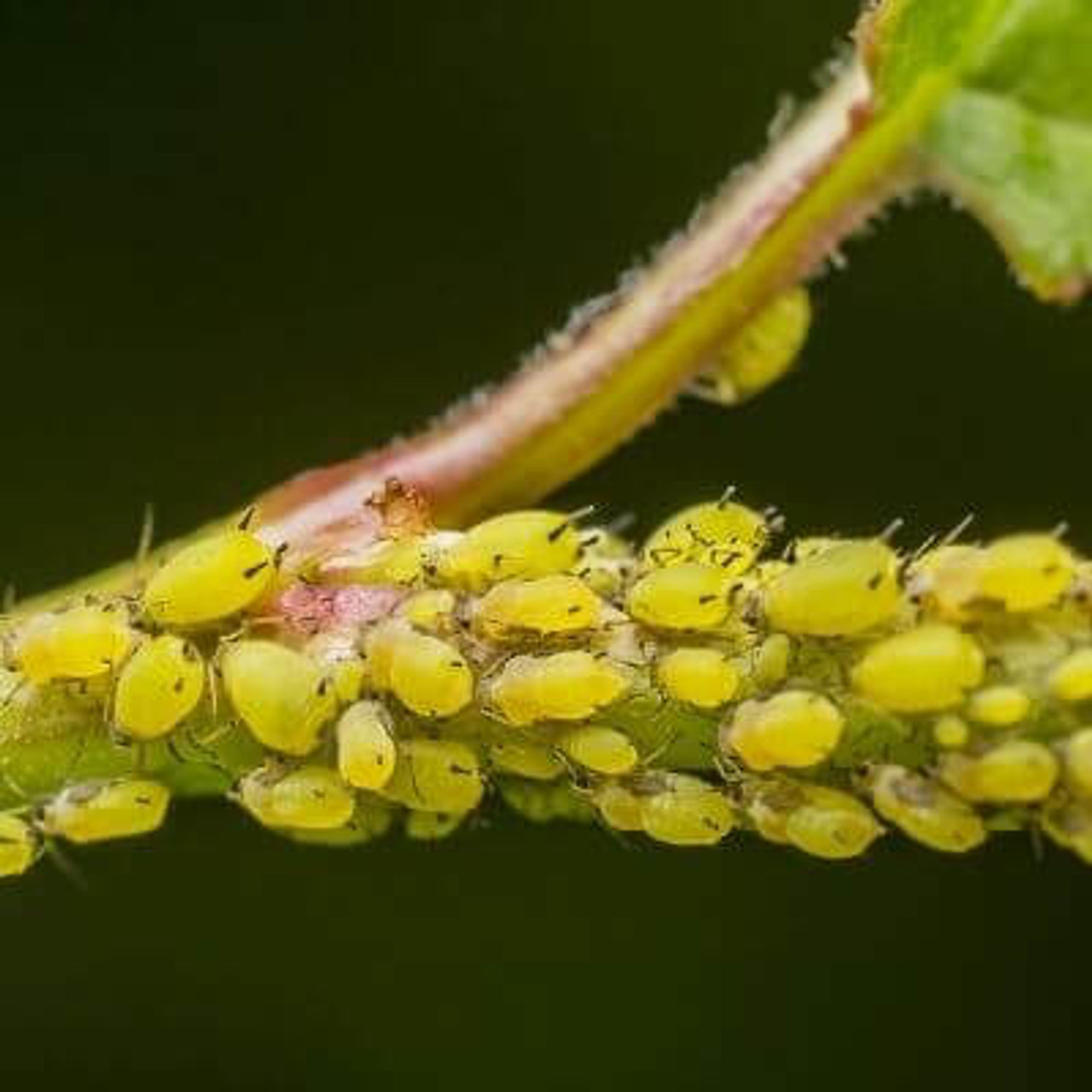 With their shockingly high reproductive rates, aphid populations can quickly get out hand if not properly understood and respected. If you choose to control aphids using biocontrols, there are two keys to success:

Many of the commercially-available aphid predators take days or weeks to reduce aphid populations, which all happens while the aphids continue to reproduce, making existing issues difficult to handle. Trying to handle an outbreak that is already at crisis levels with biocontrols is not recommended. You need to start early!

Aphid parasitoids like Aphidius colemani only attack a few aphid species; they are ‘host specific’. Other aphid predators, such as Chrysoperla (lacewing larvae) and Aphidoletes aphidimyza, have a broad host range, feeding on dozens of different aphid species. So, when using host specific parasitoids like Aphidius it is critical that we match the species of aphid with the proper parasitoid.

There are over 5,000 known species of aphid in the world. Fortunately, only a handful of species are currently known to feed on cannabis. As cultivation of this plant expands, the list of aphids attacking it will also continue to expand.

Features used to Identify Aphids in the Field

• Head -The shape of the head in adult aphids is a key feature.
Cornicles/Siphunculi - Oftentimes referred to as the ‘tail-pipes’, the shape and color of the cornicles can be used to distinguish between species.
Antennae -The length of the antennae relative to the body, and its shape can be an important factor.

Aphids have piercing/sucking mouthparts, which they use to feed on plant sap.
A large amount of the sap ingested by the aphids is expelled. This sugary waste-product is called ‘honeydew’.
The iconic cornicles on each aphid are used to excrete an 'alarm' pheromone, warning nearby aphids of danger.

As previously noted, the quickness with which you act will be the primary determining factor your success using biocontrols to control aphids and their damage. If the problem is too far gone, biocontrols are a poor choice. If you are catching the problem in the early stages, the next most important factor in your success is to properly identify which species you are dealing with. In general, the species of aphid will dictate the species of predator you choose.

I don't see any Aphids, but I'd like to act preventatively...

Although small populations of aphids are not typically a concern on their own, their propensity to reproduce quickly, and at extremely high rates, should not be underestimated. Prevention is the best way to ensure these pests never become an issue. In outdoor operations, during spring and late summer months, it is a good practice to introduce aphid predators preventatively. For example, low numbers of parasitic wasps and/or lacewing larvae can be released with the intention of nipping aphids in the bud, before they can increase to problem-levels.

Are aphids harmful to plants?

Aphids of all species feed directly on plant sap that would otherwise be used to fuel growth and production. Additionally, the excess sap that is not digested by the Aphid is excreted onto the plant tissue which can host fungal pathogens such as Sooty Mold and attract ants which will "farm" and protect the Aphid populations from natural enemies. Most Aphid species will transmit viruses throughout a crop which can drastically affect yields.

What causes aphids on plants?

Aphids are a cosmopolitan family of plant pests which occur in every temperate region in the world. Individual species can survive on several plant host species throughout the year which allows them to infest agricultural and horticultural crops nearly year-round. Their flying form (known as alate or winged Aphids) is capable of travelling great distances with the help of winds. Serious Aphid infestations are likely when the crop is over-fertilized with Nitrogen or otherwise weak or stressed.

Can plants recover from aphids?

Low levels of Aphids will likely not have much effect on plant health and, if treated quickly and properly, should not affect the life of the plant. Serious infestations of Aphid will stunt plant growth, sometimes permanently, as well as cause secondary infections of viruses or pathogens like Sooty Mold.

How long do aphid eggs last?

Aphids rarely lay eggs and instead give birth to living young or nymphs. This is why Aphid populations can spread so quickly: their young emerge and begin feeding on the plant almost immediately. These hotspots of Aphid can quickly expand to cover entire leaves or stems since their reproduction takes place in the immediate vicinity of the feeding adult.

What time of year do Aphids come out?

Aphids are possible at any time of year in a greenhouse or indoor facility. Outdoor temperatures in the winter usually keep Aphid populations at bay until the spring or summer. Depending on Aphid species, many host plants are available to allow overwintering in outdoor environments, a form of hibernation which allows the pest to quickly repopulate the area once conditions are viable.