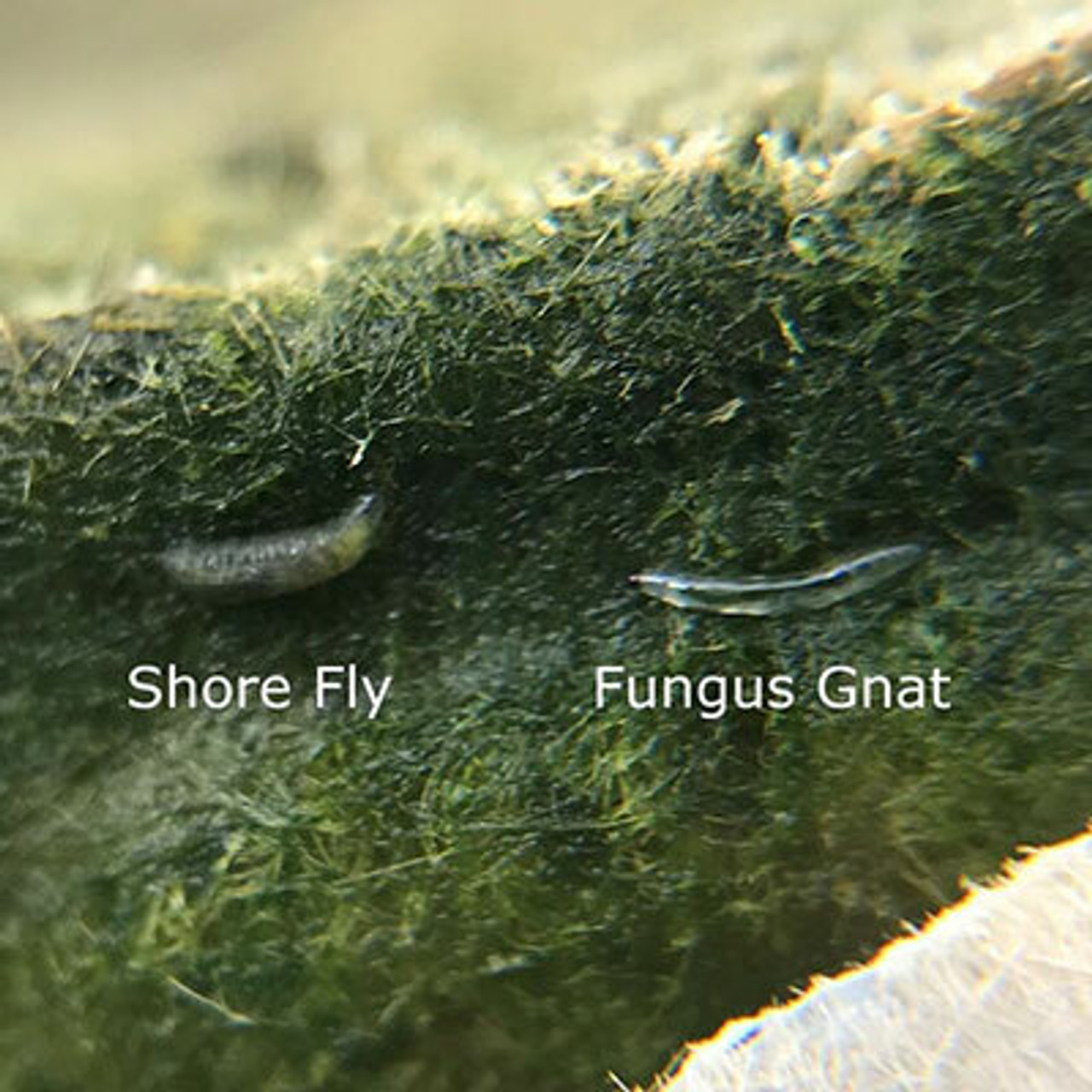 Often dismissed as more of a nuisance in protected plant culture, fungus gnats can easily get out of control if not attended to. We’re not sure why, but growers tend to overlook the negative impact that feeding fungus gnat larvae can have on plant growth, health, and yield. [Read More]

Often dismissed as more of a nuisance in protected plant culture, fungus gnats can easily get out of control if not attended to. We’re not sure why, but growers tend to overlook the negative impact that feeding fungus gnat larvae can have on plant growth, health, and yield.

The larval stage actively feeds on the plant's root system. Fungus gnat larvae feed on fungi, decaying organic material, and live plant tissue. They thrive in wet, over-watered conditions, and tend to exist in the upper soil profile, but may live near drain holes. In addition to feeding on roots, the larvae will hollow-out the stems of cuttings in propagation environments.

The adults are also capable of spreading foliar diseases such as Botrytis by carrying the conidia on their bodies.

While controlling fungus gnat adults and larvae is relatively straightforward, we cannot overstate the importance of sound irrigation practices and proper drainage to aid in their prevention and control. If fungus gnats are a recurring problem, poor cultural habits may be the root cause.

What to look for

Signs of fungus gnats include stunted plant growth, adult gnats hovering near the soil surface, larvae in the soil.

Egg - Eggs are laid by adult females into the cracks and crevice of most soil, not directly on the soil surface
Larva - There are 4 larval stages, characterized by a black ‘head capsule’. The larvae feed on root hairs, the stems of unrooted cuttings, and organic material. They may be located near the top of the container, or the bottom.
Pupa - The pupal stage does not feed.
Adult - Adult fungus gnats emerge after pupation, and are poor flyers.

- The life cycle takes between approximately 18 to 28 days, depending on temperature.
- Adults highly prefer wet soils to dry.
- Females can lay between 75 and 200 eggs in her lifetime.
- Adults are can easily be distinguished by their bead-like antennae, the the ‘Y’ shaped vein in their wings.
- Yellow sticky cards, or potato slices monitored every 48 hours, can be used to assess adult or larvae populations, respectively.

I see gnats, now what?

There are a few options for control of fungus gnats. Some growers prefer the use of Nematodes such as Stenernema feltiae, while others choose to use Stratiolaelaps scimitis.  Both of these pair well with Dalotia coriaria to gain the upper hand on fungus gnats. Apply heavier amounts up front for 2-3 weeks in a row has been the most effective to overpower a cycling fungus gnat populations

I don't see any gnats, but I'd like to prevent problems...

The same predators used to clean up a fungus gnat population can work very well as preventatives. The rate of application would be less, and you would only need to apply every 2-4 weeks to keep the population of beneficials at high levels.

* It is best to introduce soil predators anytime you bring in new soil or transplant/pot up to maintain root zone protection!

How do I know if I have fungus gnats?

Fungus gnats are a common pest in many facilities, establishing in the growing media and wherever moisture and debris accumulates. While they don't typically pose a serious threat to crops, they can be a nuisance to employees and may spread soil-borne plant diseases. Fungus gnats resemble small mosquitoes and can usually be found crawling or flying low near the growing media or floor.

Will fungus gnats go away on their own?

Fungus gnat populations will remain wherever moisture and debris accumulates. Growing media is their preferred environment as it is rich in nutrients and remains constantly moist. They will not typically go away on their own unless the environment changes drastically. In order to limit their populations, keep your facility clean of debris and pooling water paying special attention to drains and cracks in concrete which can become breeding grounds for the pest. Treating regularly with a beneficial nematode species like S. feltiae will limit their ability to reproduce in your facility.

While adult Fungus gnats do not directly feed on living crops, the larval stage of the insect is known to feed on plant roots which can cause stunting of plant growth. Both life stages can spread soil-borne diseases such as Pythium, Rhizoctonia, Fusarium, etc. quickly throughout a crop. In the worst situations, their numbers can grow to a point where employees are inhaling the insect during crop activities.

Why am I getting so many gnats?

Growing media is an excellent environment for Fungus gnat populations to thrive. Additionally, cracks in the floor, drain pipes, and other small crevices in your facility that are accumulating debris and moisture serve as a perfect breeding environment for this pest.